The Poet As Reporter 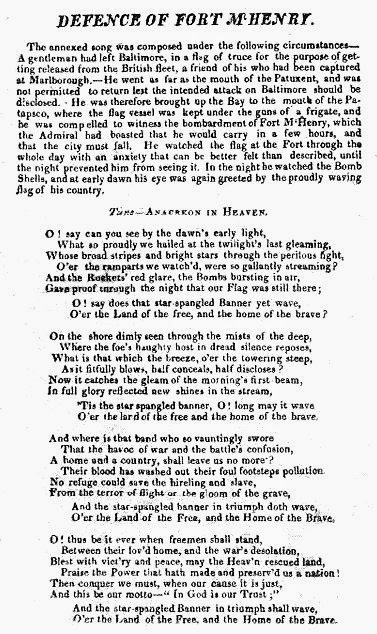 This weekend we marked the 200th anniversary of the Star Spangled Banner or, as the poem was originally titled by Francis Scott Key, "Defence of Fort McHenry”. It was during the War of 1812 when this young lawyer looked on from the British naval position in the bay as his fellow countrymen fought off the bombardment from the British. It was during these nights and in the hazy aftermath that he penned the words we now know as our National Anthem.


Rarely can someone write a narrative of a single conflict that transcends time and place to represent a greater ideal. However, Key managed the nearly insurmountable task when he put his pen on the parchment. Rarer still is the fact that this anthem that epitomizes the strength, endurance, and courage of our nation was written during what is widely considered a war that was lost or, at the very least, considered a draw. Here is how the events unfolded around Key:


On September 3, 1814, following the Burning of Washington and the Raid on Alexandria, Francis Scott Key and John Stuart Skinner set sail from Baltimore aboard the ship HMS Minden, flying a flag of truce on a mission approved by President James Madison. Their objective was to secure the exchange of prisoners, one of whom was Dr. William Beanes, the elderly and popular town physician of Upper Marlboro and a friend of Key's who had been captured in his home. Beanes was accused of aiding the arrest of British soldiers. Key and Skinner boarded the British flagship HMS Tonnant on September 7 and spoke with Major General Robert Ross and Vice Admiral Alexander Cochrane over dinner while the two officers discussed war plans. At first, Ross and Cochrane refused to release Beanes, but relented after Key and Skinner showed them letters written by wounded British prisoners praising Beanes and other Americans for their kind treatment.


Because Key and Skinner had heard details of the plans for the attack on Baltimore, they were held captive until after the battle, first aboard HMS Surprise and later back on HMS Minden. After the bombardment, certain British gunboats attempted to slip past the fort and effect a landing in a cove to the west of it, but they were turned away by fire from nearby Fort Covington, the city's last line of defense.


During the rainy night, Key had witnessed the bombardment and observed that the fort's smaller "storm flag" continued to fly, but once the shell and Congreve rocket barrage had stopped, he would not know how the battle had turned out until dawn. On the morning of September 14, the storm flag had been lowered and the larger flag had been raised.


Aboard the ship the next day, Key wrote a poem on the back of a letter he had kept in his pocket. At twilight on September 16, he and Skinner were released in Baltimore. He completed the poem at the Indian Queen Hotel, where he was staying, and titled it "Defence of Fort M'Henry".


As the ships rocked back and forth in the bay the events unfolded before him and Key recognized that he was a witness to much more than history. In the end, Key served as both poet and reporter as these are the words that solidified the patriotism of the nation and banded us together until the end of the war and beyond. It allowed us to look past the current struggles and strive for a better and brighter future. Key’s words brought us solace during a time of rebuilding and drive us to this day to see that our nation remains strong. It is only fitting that a man whose name may have otherwise been lost to history, speaks to us and for us in the words that he wrote 200 years ago.
Posted by Unknown at 11:55 PM