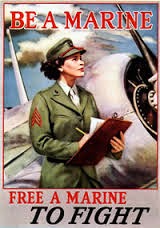 I was recently given a copy of a few pages my great aunt wrote about her life. I have talked with her many times over the past few years about genealogy, her life, and all the memories that she is happy to share with family. Now in her early 90’s her memories are still there just a little harder to access. Unfortunately it has been some time since I last spoke with here. I should change that in the coming weeks especially since we can now share some more information with her about her roots for which she has always been passionate.


The dedication event in Elizabethtown over the weekend had me thinking about all of the veterans in my family and while there are many stories that have been told and many that have yet to be recorded on this blog, my mind immediately thought of my great aunt and the pride she has in her service in the Marine Corps during World War II. She has led quite the interesting life and while the following is by no means complete, I wanted to record her words as she wrote them. While I will write a more complete story about her early years and service at a later date (as those are the most vivid memories that she described to me in her advance age), here in her own words is her “Life History”:


Grew up in Virginia. My mother was a very disciplinarian on us. I loved to be with people old (although scared of them) and young. After school at age 18 (1941) I came to Pennsylvania – had a hard time becoming a Yankee but as long as I could go home to Virginia for visit I gave in and became to like it. My first job was Freas Glass Works in Conshohocken. Mr. Freas didn’t have a job for me but took me on because I had the determination to survive.


The Marines were recruiting for women – I joined being first Lady Marine. I was sent to Camp Lejeune, North Carolina for training then to school for placement. My last assignment was Arlington, Virginia on the cemetery grounds – it was a great place to be. I had the pleasure to do recruitment and cooking school taught by a Johnson & Wales Culinary School Where I had the rank of Sergeant. Where I met Truman and Bess and Margaret on several occasions. I did voluntary work at Bethesda Hospital and Walter Reed during off duty for hours. All five of us decided to take pilot lessons where I turned the stick too fast and turned the plane upside down when I landed. I never went back. It’s called a drop out.


The war was over. I came home, picked up where I left off. Alan came home from the Army. We got married in 1945. Bought our first home in West Conshohocken. Alan, after some persisting, became a buyer at Chatlins [?]. I had some jobs, Lil Tire [?] and Hale Pump, but a stay at home mom. We moved to Mechanicsburg for short time where we were involved in school and church. I joined a golf club which I always had to be in some sport and chose golf. Son Alan was always in sports and Janet had Ballet and calisthenics.


Now they are grown and we are free to travel which we did. Alan always took me back to Virginia – he enjoyed it as much as I. We did genealogy as a hobby. Now my children said they never knew anything about me. I belong to the Marine Corps which was in Conshohocken home and school PTA. Conshohocken Junior Women’s Club, [?], Valley Forge DAR, Women’s Marine Corps Military Monument at Arlington Cemetery, Car and Auto Club Norristown, and Church Deacons, Women’s Fellowship, ??? and other boards.


The most rewarding thing I can do and enjoy is helping people even if a visit to the nursing home. Or where I can do a little bit at my age. The Lord has blessed me I feel with an ongoing gift and I thank him for it. As I leave this world, I can only say thanks to all the wonderful people left behind. I love y’all.
Posted by Unknown at 11:55 PM